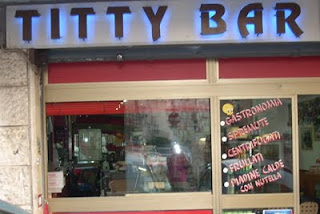 There’s an establishment in my Roman neighborhood called the Titty Bar. It’s not what you think.
Prim grandmothers meet there for morning coffee after hitting the market, dragging their shopping carts along. Workers from nearby offices crowd in at lunchtime for a plate of pasta. Teenagers arrive in groups after school to sip Cokes and text absent friends.
The Titty Bar is named for a cartoon character. Can you guess which one? It helps if you know a bit about Italian pronunciation. Generally, with some precise exceptions, all vowels are pronounced the same way every time: a is “ah,” e is “a,” i is “ee” o is “o,” and u is “oo.” So that means titty is pronounced teety.
Still can’t guess? An additional hint: there are some letter combinations in English that are impossible for Italian speakers. The “th” sound wreaks the most havoc. This particular sound is difficult for Italians because the “h” doesn’t exist as a sound in their language. It exists as a letter solely to indicate the correct pronunciation of the vowel that follows it or to underscore meaning. For example, the word ci in Italian is pronounced like beginning of the English word “cheese” while the word chi is pronounced like the English word “key.” In both cases, the “h” tells us how to pronounce the vowel. When Italians see and “h” in English, they ignore it.
Birthday becomes beertday. Notice that the “i” becomes “ee” and the “h” disappears. Third becomes teard. I spend lots of my time as an English teacher sticking out my tongue at my students to get them to practice the “th” sound.
But that doesn’t help you identify the Titty Bar. Another combination causing grief to Italian students of English is the “tw” sound.  Italians ignore the “w,” so Titty is the Italian pronunciation of Tweety.  And Tweety is surprisingly popular here. His image, and name, appear on children’s pencil cases and on t-shirts and even on kitchen appliances. Yes, there’s a Titty cappuccino maker!
Sometimes Titty is spelled Titti. My last cat was named Nefertiti, and I called her Titi. I always do a double take when I see this alternative spelling. It’s not as provocative, but it evokes a warm reaction from me every time. 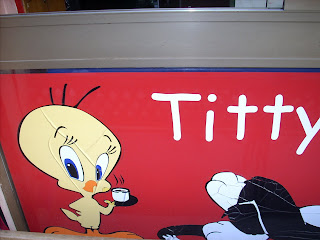 Very interesting, and I love the lesson on Italian pronunciation. I didn't know vowel sounds are consistent (what a novel idea!) or about the tw being difficult. The Titty Bar sounds like a place in my hometown with a less interesting name. Small world, isn't it?
How about CI, as in Civitavecchia? Is it pronounced SHE or SEE? I always wonder about those things. Nice post.

(I modified the post that I deleted above.) It's chee as in cheese. Chee vee tah VEH key a. The consistency of Italian vowel sounds makes English very difficult for the Italians. We have twenty vowel sounds in English. It boggles their minds.

When people try to explain how to pronounce the TH sound, they usually stick their tongue out. But actually the tip of the tongue should touch the top teeth - try it yourself! I found a good description of how to pronounce this sound here: http://answers.yahoo.com/question/index?qid=20070828042959AArahX0

Actually, Anna, we teach two different pronunciations for the th sound. In one, like thumb, the tongue does touch the back of the front teeth. With the second, like mother, the tongue extends beyond the two front teeth and touches them. I think this is too complex for most Italian speakers, so I just focus on one.

English vowels are a problem for many non-English speakers. My Iranian husband has great difficulty with them even though Persian also has variations in vowel sounds (which give me trouble, too). I find it interesting that Italians ignore "w". That is a rare sound in many languages, but often people get around the difficulty by pronouncing it like a "v".

Love the Titty Bar! My last lesson in Italian pronunciation was on a trip to Italy where a very patient (or maybe not!) server at a buffet style restaurant corrected my pronunciation of Pollo (I used my Tex-Tex variation with the ll sounding like y). She didn't care for how I pronounced zucchini either.

I'm printing out this blog so I can practice before I go back again one day.
Thanks for the lessons,
Karen

Ah, yes. Zucchini is a different problem. It's how American's mispronounce an Italian word. The Brits don't use zucchini, so it is an American thing. In Italian, the singular of the vegetable is zucchina; the plural is zucchine. Zucchino means little pumpkin while zucchini is the plural, little pumpkins. And since vowels are so important in Italian, even unaccented ones are enunciated clearly while we say "uh" for most unaccented vowels.

I shared this blog with my husband who is now afraid he has spent a lifetime mispronouncing his favorite race car driver's name. Can you give me a phonetic pronunciation for: Caraciola

I would love to lord it over him that I can say it properly!!

Oh, Patricia! I loved this one. Not just the clever title and wonderful circle you wrote from beginning to end, but the information about Italian!
Thank you

Kath, thanks. It's been perking for some time. I pass this bar when I'm out for my early morning walk. Today, I took the pictures.

Karen, the most problematic syllable is the CIO which is pronounced much like the first three letters in the English word "
choke."

Hilarious shop name! I knew that about out Tweety Bird at one time, but had completely forgotten. Thanks for the most interesting post.

Glad you liked it, Kaye. The name does make me laugh, and the blue light behind the letters on the sign add to the humor.

Where in Rome is this located? I need to know! :)

The Titty Bar is in Via Curzio Rufo near the Tuscolana. It's about a block from the Giulio Agricola metro stop.