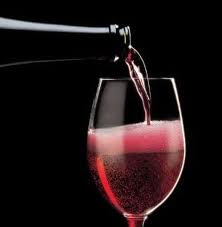 In my first post at Italian Intrigues, I asked “Does the World Need Another Blog?” While I expressed skepticism, I launched this effort. And strangely, when I was invited to join the awesome team at Novel Adventurers six months later, I jumped aboard with enthusiasm. During the past 18 months, I’ve had divided loyalties, enjoying the teamwork and camaraderie offered by the group blog and the focus provided by this one devoted to things Italian. Sometimes, I've been stretched too thin, and my efforts here suffered, I think.

My stint at Novel Adventurers is drawing to a close. From now on, my posts will be here, with guest pieces on other blogs from time to time. I hope you will continue to read and enjoy. In the future I'll be writing about weather superstitions, about maladies that seem to occur only in Italy, and as always, about the unbeatable cuisine.

I hope you'll continue to read.
Posted by Patricia Winton at Friday, June 28, 2013 No comments:

On a mid-summer evening a few years ago, I joined a group of Italian friends for dinner. Seven of us gathered around a large kitchen table and feasted on lasagna as the first course—a staple for dinner parties because the cook can prepare the pasta ahead of time with no last minute prep needed. On the terrace, our host barbecued fat sausages, steak, and chicken along with eggplant, zucchini, and red peppers. A sumptuous—and typical—Italian summer feast.

Afterward, we ate splendid peaches and cherries. When we were sated, out came the espresso and tiny glasses that signaled a digestivo would follow. When our host brought out the bottle, the Italians began muttering, “Oh, Nocino!” and “Did you make it yourselves?” and “Did you gather the noci at San Giovanni?”

When the dense syrup trickled into my glass, everyone gazed at me. They held their breath as I lifted the glass and sipped. My mouth tingled with a hint of cinnamon and cloves. When I swallowed, the flavor of walnuts lingered. The silence evaporated as everyone began talking at once to let me in on the secret. I understood nothing. Finally, order prevailed, and as I continued taking tiny sips, the story emerged. 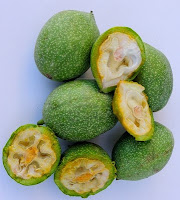 An ancient belief held that the dew on the shortest night of the year was a panacea for every illness, especially digestive problems and liver ailments. Traditionally, midsummer was celebrated between June 21 and June 25. In Italy, that became the birthday of St. John the Baptist (June 24). Thus, the dew on the night of June 23 was the most revered.

Walnuts have always been linked to witches and spells, and the superstition required that the dew on the walnuts be collected by a barefoot virgin to counteract those spells. She was supposed to climb the tree and collect the walnuts without using metal to cut them. The following morning, the liqueur was mixed and set to age until the night before All Saints Day—Halloween—when it was sipped to ward off those witches and spells.

Today, few barefoot virgins collect the walnuts, but some people enjoy the tradition of making the liqueur. That early in the summer, the green walnuts can be easily cut into quarters. They are placed in a glass jar; flavored with cinnamon sticks, cloves, and lemon peel; sweetened with sugar; and infused with grain alcohol and sometimes a bit of red wine.

Nocino is made commercially in Modena (home of balsamic vinegar) where a group called Ordine del Nocino Modenese promotes the region’s Nocino. So, if you don’t have a walnut tree handy, or a barefoot virgin available to collect the nuts, perhaps you can sample this wonderful after-dinner drink at home anyway.

Today’s post is late, but it coincides with the day for collecting the walnuts, June 23. Changes are coming to Italian Intrigues. Beginning next week, I’ll be posting here every Thursday.My last essay at Novel Adventurers will appear next week as well.

I’m writing this post under duress. Not duress, exactly, but under orders.

There’s a woman in Rome who’s been my student for the past ten years. We meet weekly just to talk, to help keep her English speaking skills honed. Last week, I checked the time just as I rang the bell and was horrified to discover that I was an hour early. When she opened the door, I offered to go away for an hour, but she ushered me into the kitchen. “I’m cooking,” she said and steered me to a chair.

Strictly speaking, she wasn’t cooking. She was preparing pesto. As she stripped the basil 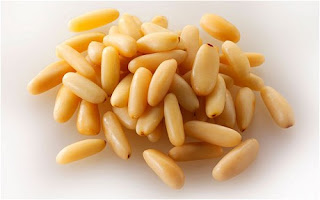 leaves from the stalks and chunked the Parmigiano-Reggiano, I had a ringside seat. We chatted as we do about this and that. When she finished, I got to sample the finished product. And she said to me, “When you put this in your blog, you have to say it’s Olimpia Pallavicino’s recipe—not yours.” And so it is.

Olimpia didn’t measure anything; she just prepared it by instinct. I’ve tried to standardize the recipe, using American measurements (with metric equivalents in parentheses). 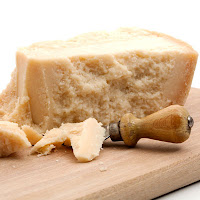 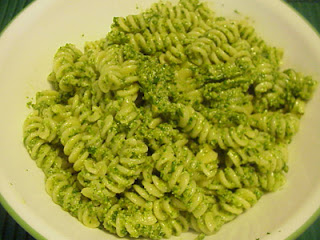 Place all the ingredients in a food processor and process until smooth. Olimpia did not grate the cheese. Instead she added it in chunks. She used a blender, and it took a while for the cheese to be completely pulverized. As a result, the pesto was very smooth.

Olimpia planned to serve the pesto with rice that evening, but for pasta she recommended using fusilli because there are so many nooks and crannies for the pesto to cling to.