The Scents of Sunday

Yesterday was the official first day of spring at my house because I left the doors to my terrace open all day. I marked it by doing what my Italian neighbors call Easter cleaning—that is, spring cleaning. I worked at a leisurely pace by doing a task (or part of one) then retiring to the terrace to read a chapter (Elizabeth Zelvin’s excellent Voyage of Strangers). Sitting on the terrace gave me an olfactory tour of my neighbors’ homes. 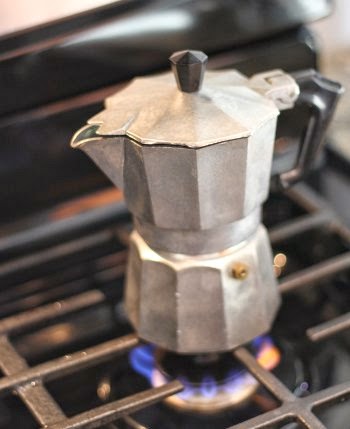 On this first day of daylight savings time in Italy, I charted my neighbors’ waking hours by the aroma of espresso wafting through the Rome air. I imagined that I could hear the hiss as steam rose in each caffeteria (the stove-top espresso maker that graces Italian kitchens) and the gurgle of the last drop of coffee entering the pot. People rose at different times throughout the morning, and the coffee ritual repeated itself with each awakening. I drank my own cup before any of my neighbors stirred, and found myself making a second round before too long.

After placing all movable furniture (chairs, small tables) onto non-movable pieces (bed, sofa), I returned to the terrace for another chapter. This time, someone was roasting peppers; the tang tickled my tongue as I contemplated what dish the cook planned. Nice fat noodles with sausage and peppers, perhaps. Or a very traditional side dish combining the peppers with roasted eggplant and zucchini. Whatever, it made me wish I had more than half a red pepper in my fridge.

Retuning to the matter at hand indoors, I plugged in the vacuum. After sweeping through half the apartment, I went back to the terrace. This time, I sniffed someone baking a chocolate cake. That’s a rare smell. Usually for Sunday pranzo, people visit a pastry shop—in years past, one of the few businesses open on Sunday. Traditionally, the treats from a pastry shop are wrapped in paper (proclaiming the identity of the shop) and tied with a ribbon. It common on Sunday mornings to see people scurrying through the streets with this precious cargo. But this week, a luncheon table in my building carried a homemade cake.

Finished the vacuuming. When I retired to the terrace this time, I was blasted with the heady scent of that most traditional of Sunday dishes—chicken roasted with potatoes and seasoned with rosemary and garlic. My fingers slipped over the chicken skin as I imagined rubbing it with olive oil. The prickle of the rosemary needles tickled by fingers in my imagination. Alas, while my cupboard held potatoes and garlic and my terrace a pot of rosemary, I had no chicken.

After being enticed by the scents of my neighbors’ kitchens, I entered mine and made a sandwich from leftover pork roast (studded with garlic and rosemary) accompanied by a glass of freshly squeezed blood orange juice. No aroma to reveal myself to the neighbors. I settled on the terrace again, munching my sandwich and getting back to Diego and Rachel (Elizabeth Zelvin’s characters).

Cheese on the Farm 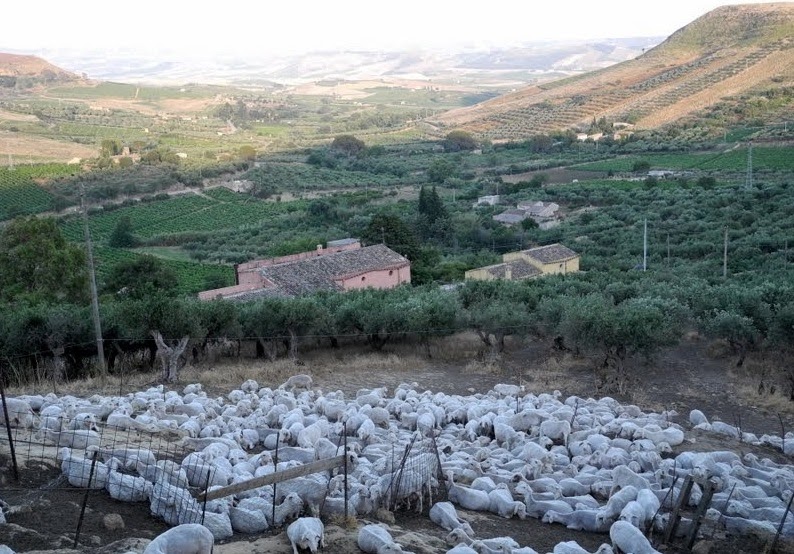 The Cucchiara family has been making cheese in the Belice Valley near Salemi, Sicily, for five generations. The newest member of the team, twenty-six-year-old Baldo Cucchiara, began hanging around the cheese-making shed at the age of five. Today, he works beside his father Salvo and uncle Liborio to produce, among other cheeses, Vastedda del Belice.

The Vastedda del Belice is protected by Italian and European laws which ensure that only cheese made from sheep’s milk produced in the valley using traditional methods can be identified with that label.

A completely organic cheese, the Vastedda del Belice from the Cucchiara brothers is made from milk from about 500 sheep which feed on grass and are milked by hand. The family continues to use the traditional method of making this cheese. First, rennet from a sheep’s stomach is mixed with the fresh milk. This first cheese is allowed to solidify in round forms. The cheese is then cut into slices, mixed with hot water, and kneaded with a wooden paddle. This kneading process stretches the cheese, eliminating any holes and producing a smooth texture.

Once the cheese has been kneaded, it is rolled into balls for the final formation. The day I visited the farm, Liborio squeezed out the balls and handed them over to Salvo and Baldo. These two quickly weighed out by hand 500-gram pieces, returning the leftover bits to Liborio. They didn’t use a scale but relied on their experience to gauge the weight. They flattened the balls and placed them in a ceramic saucer to harden. They worked quickly, forming about three dozen cheeses in less than ten minutes while fielding questions from eight writers.

On the day I was there, they were also making fresh ricotta. I arrived just in time to see the final step when the cheese is scooped into the plastic baskets. When the cheese is first transferred to the baskets, it is quite liquid. Initially, the whey drains away quickly. Over time, as the product is shipped to vendors, the drying out process slows down so that by the time I buy a good sheep’s milk ricotta at my local market, it will have a semi-solid texture.

Once we had viewed the cheese-making, our driver began rounding up my group to leave. “Wait,” called Salvo. “You may leave when I tell you.” He then led us to another building with tables. Here, the Cucchiaras set out several cheeses—including that still-warm ricotta—salami, olives, sun-dried tomatoes, homemade bread, and wine. Delicious.

Baldo, the next generation, is passionate about his calling. His eyes reflect joy as he forms the cheese. Asked by a journalist if he is satisfied. “Oh, yes,” he said. “I went to a classical high school, but all I really wanted was to make cheese.” The only thing he wants now is to get married and start a family. And I suspect he hopes to continue the tradition that his family started in 1870.

A Taste of Sicily

I’ve just returned from a whirlwind journey to Sicily as the guest of Cronache di Gusto (News about Flavors) where I visited five wineries and a cheese maker, saw some incredible sights, and enjoyed generous Sicilian hospitality. Enjoy the pictures below. I’ll write more next week. 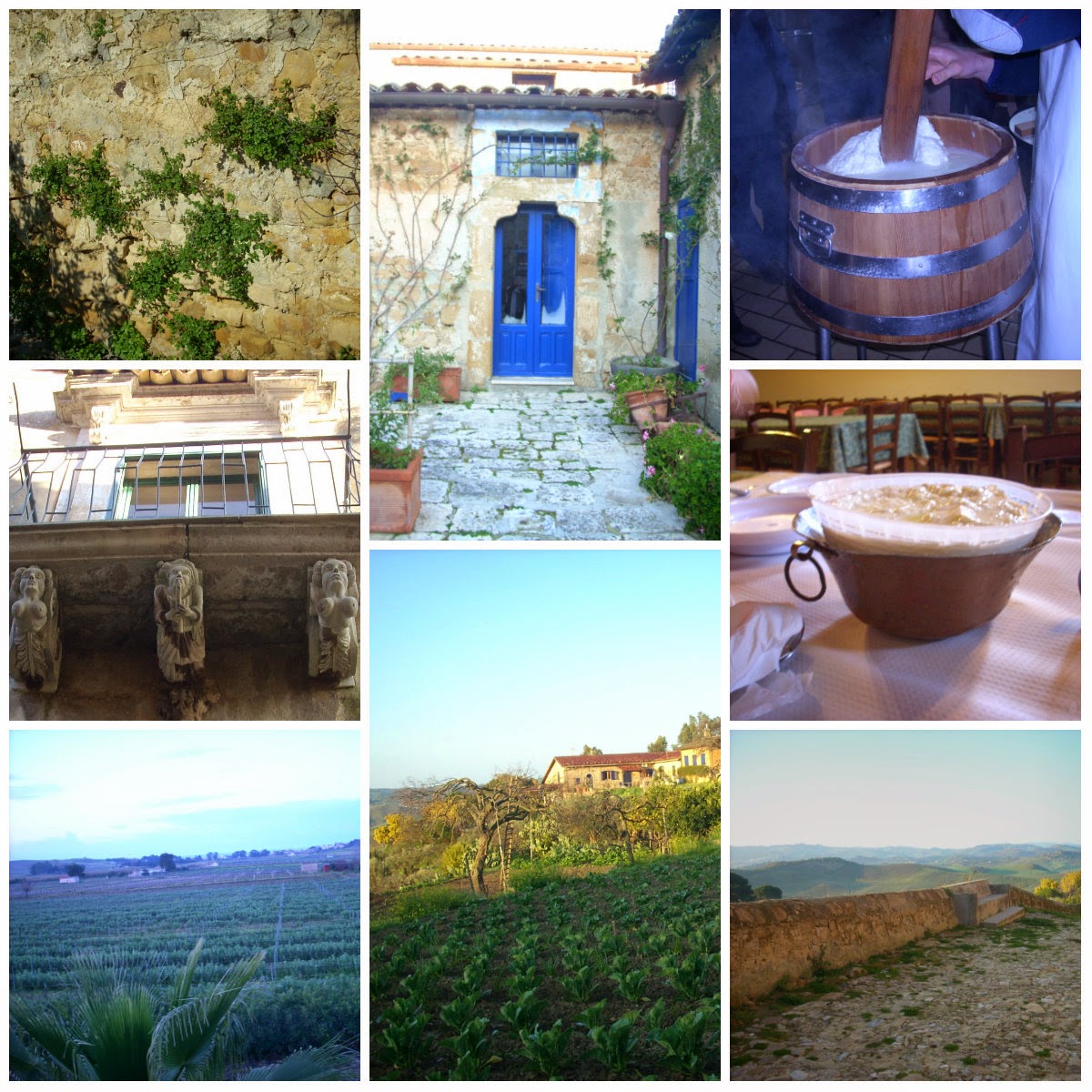 Posted by Patricia Winton at Friday, March 14, 2014 No comments:

To Market, To Market

One of my favorite pastimes in Italy is shopping at the markets for food. Rome has dozens of markets scattered throughout the city. The best known, Campo di Fiori, is an outdoor market in the center of Rome. While locals do shop there, it’s a tourist spot as well and has prices and products targeting the out-of-town crowd.

There’s another tiny street market in the center near Via Margutta, Gregory Peck’s street in Roman Holiday. In this tony neighborhood, tourists pass by on the the parallel Via del Corso and Via del Babbuino, missing out on one of the best sites and experiences of the city.

When I first came to Rome, I haunted the markets all over the city, getting off buses to visit a new one. I learned a great deal about Italiann, food then. On one of these excursions I first encountered puntarelle, a special Roman dish made from a type of chicory. The leaves must be stripped from the stems, the part that’s eaten, and I watched a man using a special tool for the job. In my own market, I find bags of cleaned puntarelle, but so far, I haven’t seen anybody cleaning it. The stems are dressed with garlic, anchovies, olive oil, and white wine vinegar.

During my first year in Rome, I shopped with a little old man and woman who were only licensed to sell eggs. I bought four at a time, and they wrapped them in brown paper. After I had been buying from them for several months, the woman whispered, “Vuole delle fragole?” Fragole are strawberries, and I thought buying some a good idea. She took me to the trunk of her car, shielding the view with her body and placing me in line to do the same. Inside, she revealed some stunning small purple grapes. She was selling them without a license and making them available to good customers. I bought some; they were good. That’s how I learned that some grapes can be called strawberries, too.

During the fall and winter months, proprietors of vegetable stands cut vegetables to make minestrone mix. The mixture varies from stall to stall, but it will include root and leafy veggies. Sometimes it will include onion or shelled beans; sometimes not. It’s great to take a kilo home, mix it with some stock and a bay leaf, and let it simmer while I work. And lunch is ready.

I haunt just one market these days. It’s a five minute walk from my home, and I think it’s one of the best markets in the city. Covered, with heating and air conditioning, Il Mercato Tuscolano III feeds me. About 60 stalls spread throughout the hall, and unlike some markets I know, no stalls remain unused.

One stall sells many varieties of mushrooms, another sells 20 or more varieties of fresh pasta. The center of the hall holds a stall selling fresh buffalo mozzerella. Branching of from that are many vegetable and fruit stands. Fresh eggs? Several stalls sell them. One woman sells “exotic” items. She sometimes has sweet potatoes or plantains.

You can buy a slice of pizza if you’re hungry or a cup of espresso in the corner bar. And in case you have other needs, you can buy paper towels or a spool of thread, get your shoes repaired, or pick up fresh flowers.

A couple of times, I’ve taken friends visiting Rome to the market—sometimes making lunch from our purchases. Everybody going with me has been enchanted, so far. Wish you could join me.

I’m off to Sicily in a couple of days. I’ll post from there next week—probably just photos.