The rain began falling in torrents around dawn, accompanied by flashes of lightning and cracks of thunder. It was the kind of intense storm that usually passes quickly, but this one stalled over Rome for several hours last Thursday. The city crashed to a halt.
The rain would appear to slack off, and people collected their coats and umbrellas and rubber boots to go about their business, then the rain and thunder and lightning would begin again. It was difficult to make out structures across the street because the heavy rain obscured visibility.
I didn’t have any appointments until two p.m., so I made minestrone and hot spiced apple juice as comfort food and snuggled up to my computer. The configuration of my apartment makes it impossible to see the street without going onto the terrace, so I was blissfully ignorant of the extent of the chaos.
At one o’clock, the sun came out, I polished my sunglasses, grabbed my bag and umbrella, and set out. I found the gates to the metro chained closed. Someone told me it was allagata, a word that means approximately 'made into a lake.' Since my local stop is shallow, I walked to the next stop, expecting to find it open. It wasn’t. I walked to the next. Closed. Then I began waiting for a bus. There were none.
In the hour that I was out, I was shined on by the sun, pelted by the rain, startled by the thunder and lightning. I finally gave up and canceled my appointments, but I didn’t learn the extent of the storm until I returned home to look at the news.
Rain flowed down steps into the underground like waterfalls, forcing one line--the one I use--to close half the route. The other line closed several stations due to flooding. In addition to that, water collected in the streets, forcing busses out of service.
While I was out, I had seen public works crews out trying to remove debris from the storm drains, but so much water had fallen in such a short period that it had the upper hand.
Water rushed into many businesses in my neighborhood and others throughout Rome. A small shop where I bought computer paper on Friday had lost lots of stock, including boxes of detergent, paper products and much more.
In central Rome, the rain tossed the city’s characteristic sampietrini paving stones as if they were coins, leaving great holes in the streets, described by one newspaper as 'chasms.' One man, living in a basement apartment, drowned in his bed.
The usual screams about how public officials handled the emergency are rampant. The mayor claims that it was a natural disaster and couldn’t be anticipated. The opposition points to other recent rainstorms, albeit not so severe, that produced chaos as well.
As the rain raged, information trickled. One of my friends boarded a bus that would have taken him within walking distance of home. On board, an announcement that the metro had reopened sent him off the bus at the main train station to take a subway home. Once off the bus, he discovered that the metro had not, in fact, reopened, and he found himself stranded at the train station.
Heavy rain is predicted in Rome today. Intense storms blasted the north yesterday with lots of damage. Four people died and six are missing. Mudslides covered highways and boats entered piazzas.
The first thunderbolt just rumbled in Rome. It’s time to build an ark.
Posted by Patricia Winton at Wednesday, October 26, 2011 No comments:

Few things are as challenging about living in Italy as waiting in line. It’s a special trial at the supermarket where there is no “ten items or less” line such as American supermarkets have. I cringe when I arrive at check-out with my three items just behind someone with a cart chock-full. Sometimes, the person will see that I’m carrying few items and allow me to pass. At others, the person will avoid all eye-contact to dodge noticing my piddling purchases.
Unlike the British, who stand in orderly queues, Italian people tend to bunch up instead. In that way, people cut into the line without being obvious. There’s a funny little woman that I see in various parts of Rome. She has a bright spot of 1950s-era rouge on each cheek and wears a plaid golf cap. She always plants herself by the display rack flanking the checkout line and eases her way ahead of the others.
Another tactic some shoppers use is to leave a partially filled shopping basket in line with the pretext of going back for a forgotten item. Then the shopper returns with an armload of stuff and drops it into the basket, perhaps going back a second time. If you step ahead of the basket, the returning shopper will often complain vociferously that you’ve usurped her place.
The lines move slowly, too. In an early blog (March 23, 2011), I wrote about how cashiers stop a line by asking customers dig for small change. But that’s only one delay. Conversation has a similar effect.
In general, Italian people are chatty, and cashier and customer often engage in spirited small talk during the course of a transaction. Italian people use lots of hand gestures when they speak, and the cashier will stop ringing up the purchases to use his hands to make a point. And if the story hasn’t finished after money has been exchanged and groceries bagged, it continues, leaving the other customers waiting.
My Anglo-Saxon need for order makes me wait my turn. So I stand behind those people with filled baskets. It really gets my goat when my turn finally comes to have someone come up and say, “I have only three items, can I go ahead of you.” Since I’ll likely have only one, or two, or three myself, I always decline. And I’m perceived as rude.
Where practical, business establishments now use the “take a number” system. At the post office, at banks, at my doctor’s office (where she has office hours on a first come, first served basis) there’s a number machine. If someone tires of waiting, or changes her mind, she often puts the paper number on top of the machine for someone else to use. It’s always a thrill to find a usable number that lets you cut ahead of others without a twinge of guilt.
At my favorite busy market, several stalls have the number system, but even there people find ways to break line with various excuses. At the salumeria (cold cuts and cheese stall), I’ve often seen people say, “But I didn’t know you had to take a number,” and insist on being served ahead of us waiting our turn.
At the fish stall, I heard the best excuse ever. It’s a very popular stand, and there are frequently twenty or more numbers ahead of you. One day, a woman pushed forward saying, “I can’t wait for a number; my daughter’s having a baby.” It was unclear to me if the daughter was on her way to the hospital and the woman needed to finish her shopping quickly. Or if the pregnant woman craved fish. Or if she wanted to eat a plate of fish before delivery. Or if the mother had just learned the news and couldn’t cope with shopping in her excitement. Whatever the reason, she made her purchase ahead of the rest of us.
I do get frustrated and annoyed when these things happen. But I have to shake my head and smile, too. It’s these cultural foibles that weave the fabric of my life in Italy. There are annoyances everywhere. I try to enjoy these.
Posted by Patricia Winton at Wednesday, October 12, 2011 1 comment:

A Touch of Autumn

Although the daytime weather is warm enough for women to wear sundresses, there is a little hint of autumn in the early morning air. You notice that fall is coming, too, in the markets. Summer berries have disappeared. A few peaches and nectarines linger, but they seem a bit sad. Luscious grapes lie in great mounds: big pink ones; sweet black ones; smaller, but no less sweet, white ones.
They can be so sweet that it’s like eating candy. I remember once sitting at a seaside campsite in the south of Italy. My companion had taken the car to do some errands that included buying food. I was puttering around, enjoying the sun.
The only thing I had to eat was a bag of grapes. I ate a couple and turned over in the sand to bake my back. Ohhh. Those grapes were good. I ate a couple more, and turned again. I continued in this mode for a little while, then I just sat up and ate and ate and ate. By the time my companion returned, the grapes were gone.
Grapes make a good ingredient for cooked dishes, too. I’ve tried various crostade (Italian pies) made with grapes, sometimes paired with other fruit, and lots of cakes as well. The list goes on: sorbetto, strudel, and a bread called schiacciata.
But grapes also go well with meat. Poultry, either duck or chicken, and grapes make a nice combination, and I’ve even seen a recipe for goose liver and grapes. Here is a quick and easy dish that introduces autumn changes to our diet. You might want to try it.
Sausage and Grapes
1 pound Italian sausage
1 pound of white grapes (my original recipe calls for 32 grapes!)
1 tablespoon extra virgin olive oil
2 tablespoons white wine
Salt 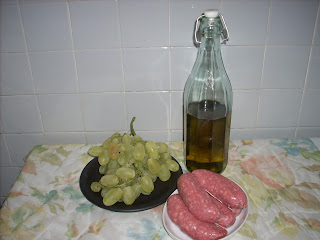 1.     Prick the sausages in several places with the tines of a fork.
2.     Heat the oil in a frying pan. Add the sausages and let them brown, turning frequently.
3.     When the sausages are nicely browned, bathe them with the wine. (You understand that I wouldn’t measure the wine, nor would most Italian cooks. Just splash a good spray from the bottle.)
4.     Let the sausages cook for about ten minutes, turning from time to time.
5.     Meanwhile, wash the grapes and separate them from the stem.
6.     Add the grapes to the sausages and cook for another fifteen minutes.
7.     Add salt to taste, if needed.
Posted by Patricia Winton at Wednesday, October 05, 2011 4 comments: