A couple of days ago, I encountered a bull fighter and a flamenco dancer at the supermarket. They were about one meter (three feet) high—in other words, children. Decked out in their carnival finery, they and other children will wear their costumes for afternoon walks with their parents (including stops in the supermarket) and even to school until Martedì Grasso. The costumes can be quite elaborate—even for babies—and have price tags to match.

While they’re out, children toss confetti at passersby and at each other. And, unfortunately, they attack with Silly String, which, fortunately, doesn’t appear at any other time of year, including Halloween. I went into a couple of shops this morning and found: Silly String, confetti, streamers, noisemakers, blank masks for hand painting, giant bow ties, magic wands, and plastic swords. That was just one shop on a shelf opposite the leftover Valentine paraphernalia.

Parades with floats and costumed performers will grace many cities and towns—especially in Venice and Viareggio. But the real stars of the carnival season are the desserts that only appear at this time of year. Here’s a brief rundown. 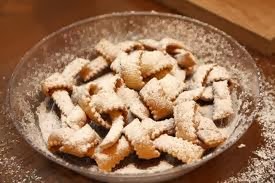 These melt-in-your-mouth tidbits are similar to a rich pie crust made with eggs. They are rolled into rectangles and cut into fluted squares. Traditionally they were fried, but in this day of frowning-at-fat, they are sometimes baked. After the frappe come out of the oil or oven, they are generously dredged with confectioner’s sugar.

These little balls have similar ingredients to frappe, but sugar, vanilla, and grated lemon zest are added. The mixture makes a firm, but not rigid, dough that is formed into small balls. These are always fried and dusted with either confectioner’s or normal sugar.

Apple fritters, these, made by coring and slicing apples about one centimeter (1/4 inch) thick. A batter that includes the juice of a lemon and cinnamon coats the slices which are then fried. Really good served with vanilla ice cream.

Unlike the Castagnole di Carnevale and other sweets stuffed with ricotta, the cheese becomes a part of the dough. The ricotta is mixed with eggs, flour, sugar, vanilla, baking powder, and the grated zest of a lemon and an orange. After the dough rests in the fridge for about half an hour, it’s formed into small balls and fried like the other castagnole and sprinkled with regular sugar.

A medium-firm dough made with flour, yeast, eggs, milk, and butter makes the basis for this popular carnival treat. Once the dough has risen, it is rolled into a thin rectangle and sprinkled with sugar and lemon zest. The dough is then folded over itself several times, forming a roll. The roll is cut into short pieces which are then fried. The hot oil carmelizes the sugar and the layers open something like a fan. It’s a gooey, concoction, sometimes covered in colored sprinkles.

Sweet fried ravioli comes from a dough laced with the ever-present lemon zest and a couple of spoonfuls of white wine. When the dough is rolled out into a thin rectangle, it is cut into fluted circles. Half the circles are filled with a spoonful of either ricotta, marmalade, or Nutella. The remaining circles top the filling and each ravioli is sealed then fried and sprinkled with confectioner’s sugar.

Many variations to these sweets exist throughout the country, usually with regional twists. In some places, for example, the chiacchiere resemble frappe.

I hope I’ve whetted your appetite.

Must one have coffee with these goodies, or would some of them pair with wine?

Congratulations on starting your blog again, Patricia. I love Carnival, but more for the wonderful carnival parades and the costumes, not so much for the cakes and desserts. The very first year I was in Italy, over thirty years ago, my husband and I were invited to stay in Venice for the carnival. I'd only been in Italy a couple of months, and had absolutely no idea what I was going to see. I didn't even know people dressed up in costumes! Can you imagine my amazement when I walked out of the hotel that first morning?

Jenny and I watched La Grande Belleza yesterday. Is that really what goes on in Rome during Carnivale?