The Socialization of the Italian Man 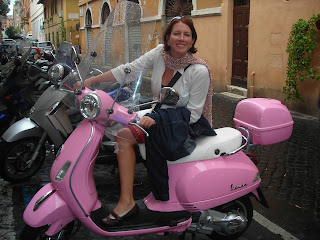 My guest today is Estelle Jobson. Estelle has more than a dozen years of experience in book publishing as well as a master's degree in publishing from New York University, which she attended on a Fulbright. She has done just about everything you can do with a book, except eat it. Estelle, who is South African, speaks five languages and has lived in as many countries. She now lives Geneva, where she works in communications, writes, edits and takes empowering naps. She is active in promoting women’s health. Her new book, Finding Rome on the Map of Love is available as an e-book from Amazon.

Excerpt from Chapter 3. The socialisation of the Italian man

When a dashing Italian man came tyres-asquealing into my life, he swept me off my feet and into his bed. Notwithstanding my already spinning head, I had a couple of double takes to do. Italian men were socialised differently. Starting with the male hairdo. 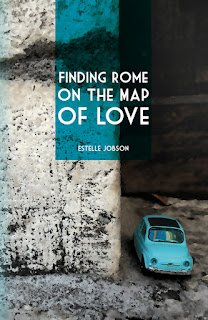 Certain features of my Italian boyfriend were elusive, yet significantly troublesome. For one, I strongly suspected his hair was blow dried. This was soon confirmed. Having never before dated a man who blow dried his hair, I had reservations. The debonair hairdo, combined with his kiwi fruit lip balm and pots of man’s eye cream – a mere drop in the ocean of his bathroom products – were perplexing.

Soon, while I was gossiping with my girlfriends about the blow drying business, they informed me that I was dating a ‘meterosexual.’ Now this species of man was something I had only formerly read about in the lifestyle section of the newspaper. Watching ruddy fellow South Africans watching him confirmed these speculations. Really, with his exquisite grooming and immaculate fingernails, he stood out like a stylish Italian lace-up amidst a mound of flip flops.

A relative newcomer on the sociology front, a meterosexual is roughly defined as such: a sensitive, sophisticated man who takes an interest in his appearance, his state of being and other matters refined (cuisine, the arts, fashion, his natty outfit and teeny espresso). At times it was difficult to differentiate which was what: meterosexual, male, the individual in question, or simply an Italian?

His explanation helped. ‘When you are small boy, your mamma call you before you go out to play with your friends,’ he said. ‘She call you over to check your clothes, your ‘air, your face is clean, she make sure you looka nice. Only then you can go and play houtside.’ After mamma’s lick, spit and polish, you’re free to rough and tumble with your mates.

This tweaking serves to foster a lifelong hair fetish and the national concern of fare una bella figura. To cut a fine figure, as one could translate it, means to make a good impression, to come across well to others. Based largely on one’s appearance, clothes and shoes, hair and accessories, the practice is paramount. More important, for example, than actually saying or doing something impressive.

The overall outcome of this bella figura concern is a highly groomed people. Truly easy on the eye are many Italian men: spiffy, manicured and coiffed, and yes, well, a trifle vain. Evidence suggests that vanity is no longer one of the Seven Deadly Sins. Behold how it thrives. Some men, well into their thirties, are still getting the once-over from mamma before they step out, albeit for different kinds of horseplay. These guys are called mammoni (mother’s boys).

Although growing taller by the century, Italians are generally still on the dainty side – the expression ‘bite-sized morsels’ springs to mind. Those gorgeous watches bedeck rather petite, if hairy, hands. Instead of Italian Stallions, the country is populated by clipclopping ponies. My meterosexual is on the petite side himself, slight in build and rather lean. By Italian standards, he is of medium height. He sports a chiselled chin, a decisive nose, delicious lips and a full head of springy curls. He’s not fully carpeted in black hair, fortunately, and I’m equally pleased to report that he has a decently large and masculine-sized...shoe, unlike troupes of his dainty-footed countrymen.

Some Italians are svelte and slim, others short and portly. Very many have wonderful aquiline noses, yet surprisingly few have sprouting nostril hair and more often than not, they’re cutting a pretty damn fine figure. In fact, some are breathtakingly hot. Something’s going right in the vanity department and I imagine it’s got a lot to do with...mamma.