Yesterday, August 15, was Ferragosto, one of Italy’s favorite holidays. A day when people splash at the beach or seek the cool of the mountains. When they barbecue steak and sausage or lick cool cones of gelato.
Some say the holiday dates back almost 3000 years to the legends of Romulus and the founding of Rome. The ancient Romans certainly celebrated an August festival called Consuali, dedicated to Conso, the god of the harvest. According to legend, Romulus invited the neighboring Sabines to the feast, and the Romans kidnapped the Sabine daughters to be their wives, an event known a The Rape of the Sabine Women (rapito in modern Italian means kidnap).
Whether you accept the legend or not, fact is that the Emperor Augustus instituted a similar festival, called Feriae Augusti, in 18 BC. During the month-long festivities, celebrations honored various gods associated with the season, including Conso (harvest), Opi (fertility), Vortumnus (seasons), and especially Diana (woods, wild animals, maternity, and childbirth).
It was a time to rest and play after the arduous growing season, and the homage to Diana may indicate hope for fruitful pregnancies as well. Roman women certainly prayed to Diana throughout the year in hopes of safe and painless childbirth. The festival to Diana during the Feriae Augusti were the only time during Roman period when all people could mingle, masters and slaves, patricians and plebeians alike. 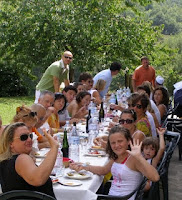 Over time, the August holiday was gradually subsumed into the Christian story. On today’s Catholic calendar, August 15 marks the Assumption, the day that Mary was assumed into heaven. Vestiges of the ancient month-long festivities continue, too. Many Italians take the month off for vacation. During the first couple of days of the month, people asked me where I would be going for my holiday--this despite the fact that I had been away during both June and July. 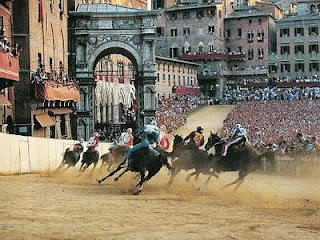 Ferragosto traditions vary throughout the country and have changed over time. At one point, for example, Rome’s Piazza Navona was flooded and boat races were held. One event, calvacata dell’assunta (Palio of Siena), dates from the 16th century. Held on August 16, this horse race around the town’s shell-shaped central piazza features medieval costumes and music. Horse racing was apparently part of the ancient Consuali games, so this link has carried forward. 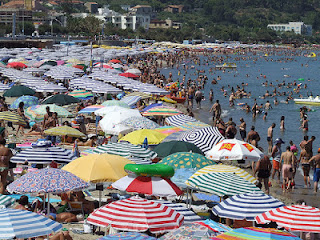 Purification by water and by fire constituted major parts of the Feriae Augusti rituals, and both elements continue today when a majority of Italians go to the sea or to a lake and end the day’s festivities with fireworks.
In some ways, the holiday reminds me of America’s Thanksgiving: it’s one of Italy's biggest travel days, people enjoy elaborate feasts (often picnics), and families gather to celebrate together.
Posted by Patricia Winton at Thursday, August 16, 2012

Thanks for the history on this fabulous holiday, Patricia.

We've been celebrating it with a big outdoor summer Italian feast and a bunch of friends for a couple of years, ever since we saw the delightful movie "Mid-August Lunch." Had to skip it this year, what with moving and getting two books out, but next year for sure. Not bad for a couple of Scottish-Irish types with not a drop of Italian blood!

Edith, what fun that you celebrate Ferragosto. Auguri! (That means greetings, best wishes). There are other, more ostentatious holidays, but I think this is the essence of Italy. In years past, if people didn't have a place to go for Ferragosto, they hid at home so that no one would know they were alone.

See if you can find that movie, Patricia. It's really fabulous and sweet.

Oh Michele, I'm glad you enjoyed the post. I love Lucca, though I've never been there for Ferragosto. Maybe next year....

I've never heard of this holiday, but it sounds fabulous! Thanks for the glimpse and the history, Patricia.

Oh, it's Italy's favorite. I'm glad you enjoyed the piece.

Thanks for giving us the history of this holiday. Italy shuts up totally - it's like Christmas Day in midsummer. I had to go to Rome on Ferragosto this year. Even the Chinese shops near the station were closed.

It's amazing, isn't it? Even most of the bars in my neighborhood were closed this year. I always find myself scrambling on the 14th to make sure I have basic food supplies in the house.

Patricia: We are in Italy now as we usually are this time of year. Our wedding anniversary is August 15th- adding to the day. With the warmth of the people, the fun of events, and our own celebration it is a grand day.

How lovely, Cassy. Auguri! I hope you had fireworks.

What a fun post! This holiday sounds like a combination of the Fourth of July and Thanksgiving, my two favorite holidays because they're so family-oriented. I don't have a drop of Italian blood in me, but your description of the holiday made me wish I could beam over to Italy for next year's Ferragosto. Thanks, Patricia.

Suzanne, I'm glad you enjoyed the post. I warn you that traveling TO Italy in August is not a good idea. Many Italians take most of the month off, so many things are closed. On the other hand, there are fewer crowds and less traffic.

I remember Ferragosto. I spent the summer in Fregene as a governess because I didn't want to come home. The woman was American, a famous model in the 50s, and the husband Italian. They had one child, rather a brat, but he was the only grandchild, born on the same day as his Italian grandfather. So you can imagine. They had a house across the street from the beach, a cabana, and it was wonderful. I was treated more like a member of the family. On Ferragosto, we had a big family get-together. Ah, the wonderful memories.

Polly, you had such fabulous experiences during your stay in Italy. I can imagine the birthday celebration!

It's enormous that you are getting thoughts from this paragraph as well as from our
discussion made at this place.

Stop by my web site how to grow taller