The Many Shapes of Pasta

“Do you like fettuccine?” a friend asked as she was preparing to cook the pasta for a dinner party. Her question amused me because it highlighted the Italian obsession with pasta shapes. She didn’t ask me if I liked tomato sauce, or clam sauce, or any other accompaniment. She wanted, I mean really wanted, to know if fettuccine pleased me. ﻿﻿﻿﻿﻿﻿  ﻿
﻿
﻿﻿﻿﻿This obsession with shapes and sizes of pasta permeates the culture. I once encountered a woman in a grocery store shortly before Christmas. She searched for a specific size of spaghetti. Spaghetti comes in many sizes, numbered roughly from one (what we Americans call “angel hair”) to thirteen, a very thick noodle indeed. I think she wanted size six and the store had only size seven. That just wouldn’t do. It didn’t go with the sauce she planned to serve.

I’ve always preferred the smaller types, angel hair and such, simply because they cook faster—in about three minutes, but I’m developing an appreciation for the thicker varieties after so many years here. Some of these can take fifteen minutes to cook.
Tradition governs which type of pasta should accompany which type of sauce. I’m not an expert on this topic, and I have to admit that my eyes glaze over when someone tries to explain. I think, but I’m not really sure, that you should use ridged pasta with creamy sauces and smooth pasta with chunky ragu or vegetable pasta. 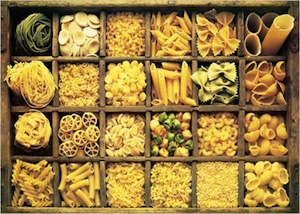 Early in my days in Rome, I bought a series of books issued weekly with the newspaper featuring only pasta dishes. I didn’t get the index until the series ended. Imagine my surprise, and frustration, when I discovered the index was arranged by pasta shape only. You couldn’t look up “eggplant” or “rabbit” to find recipes by ingredient. The index listed fusilli, mezze maniche, bavette, pappardelle.
In my first years in Italy, more than forty years ago, I learned to make pasta by hand using a hand cranked machine. Taking the machine back to the U.S. led to my career in cookery because at that point, few people in America had ever seen a pasta machine. I taught cooking classes, wrote a newspaper column, and developed a fan base of people who liked to eat my pasta. When I began returning to Italy again in the 1980s, I boasted to someone about this “achievement.”
“Oh,” he said, “you don’t want to make pasta with metal rollers. You need wood to rough up the pasta and make it hold the sauce better.”
So much for pride.
One commercial pasta company here charges high prices for their dried pasta because it’s made with zinc rollers. Apparently the zinc roughens up the pasta surface in a way that steel doesn’t.
My friend Diana Collins, a poet and long-time resident of Italy has written a gleeful poem about pasta shapes and has consented to let me share it:
Fusilli Bucati Corti

not pappardelle, macaroni, lasagna,
or tagliatelle, not shells to stuff,
ravioli, rigatoni, or tortellini,
but it's fusilli I like best

or plow through pesto with gusto.
Golden snippets of telephone cord
relaying long, spiraling conversations
between hunger and appetite.
This past weekend, I took a gastronomic tour with journalists covering the Italian culinary scene. Over two days, we spent about nine hours at table plus sampling wares at factories. Near the end of the last meal, I compared the various things we had eaten, including varieties of pasta. The man next to me said, “Ma pasta è pasta. What matters is the sauce that covers it.”
So much for my lesson on pasta shapes.
Posted by Patricia Winton at Wednesday, December 14, 2011

I do love pasta, but I must admit all the shapes confuse me. I really like the lighter ones, but maybe it's because I use the wrong sauces. How about a lesson on which pasta with which sauce, Patricia? I could certainly use one.

Ellis, I'm not an expert in this department. The idea is to have a shape that attracts as much sauce as possible. I think one reason my friend Diana Collins may love fusilli so much is that it really holds the sauce.

What an interesting post, Patricia. I am a huge fan of pasta and would e happy eating it every day. :) There is an Iranian dish that is a bit like spaghetti bolognese except that it's cooked exactly like Persian rice, including the crispy layer on the bottom of the pot. It's called "Macaroni", although it can be made with any shape of pasta.

In Italian, macaroni, or maccheroni as it is often spelled, refers to all types of pasta.

Patricia! What a fun post. I was blown away by the double aisles of pastas, and the understanding that wasn't all of them. Gracious. I also tend to gravitate to angel hair pasta for the quickness factor. I'm part of the instant generation. Enjoyed it!

Glad you enjoyed it. The variety is amazing. And I hadn't noticed until I took the photo that blue is the color no matter what the brand. That's true in the dairy case, as well. I just finished reading Seeing Red. Complimenti, as the Italians say.

Really enjoyed your article about pasta. Am now preparing dinner and pasta is on the menu for tonight. I boiled a broccolo romano and am going to ripassare in padella with some smoked pancetta and garlic and hot pepper. I plan to use a “short” pasta such as mezze maniche or penne rigate. We prefer the rigata because it does “catch” the sauce better. Lots of parmigiano or pecorino and it’s done.
Buon appetito.

Thanks, Federica. That sounds great. I'll try it soon. Have the smoked pancecetta in the fridge and I'll pick up some brocolo at the market. I must say that I use penne rigate more than any other pasta.

What a great topic? Pasta sizes and shapes. My twin sister only eats spaghetti. She was truly amazed that I had 20 different shapes of pasta in my cabinet. It's not what I like best, it's which pasta goes with what I'm making. I love angel hair with tomato sauce, thin spaghetti for lemon and caper sauce, large noodles for lasagna, dentalini (sp) for minestrone, elbows for lentil soup, etc. Got the idea?

Love your blog. Just signed on.